The Piping Plover a delicate coastal shorebird named for the melodic mating call it makes, nests on the beach in the sand making it a prime target for predators, it’s considered endangered and is protected.

The Piping Plover’s nesting area is the Northeast coast of the United States.  During Spring and into early Summer when the birds begin to look for prime nesting areas, this is where you will find them.

Conservationists have passed laws protecting the species. Sections of prime waterfront are closed off to the public, to protect the Piping Plover Nesting Areas.  These areas are closed off to Four Wheel Beach Buggies, Surf Casters, Surfers, and even local beach combers cannot enter the protected areas. 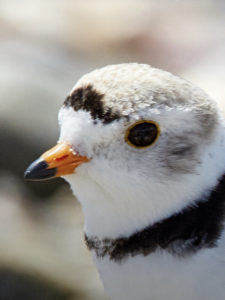 Most of the closed beaches are accessed by the Surf fishermen who get to the secluded and pristine beaches by cruising the beach in 4×4’s with access permits.  The access roads, paths and beachfront are closed where the plover nest.  Access to the prime beachfront areas are put on hold and fisherman cannot fish the protected areas thus another beneficiary of the endangered status are the migrating fish coming up the coast that would be targeted by the sportsman.

Most fisherman understand the need to protect the species and accept this sacrifice sometimes reluctantly.  But they make way and give the Endangered birds a chance at propagate.

Every year we share the beach so that the piping plover and other endangered shore birds can breed, nest, lay and successfully hatch their eggs, raise their young and fly away.

I have observed beautiful flocks of these shore birds and the young cruising the beach.  The Plover are on a path to recover, but still have a long way to go to build their stocks.

Everybody is doing their part to help avoid this critical extinction problem facing the plover and all endangered species.  The sacrifices fisherman and other beach lovers make goes unnoticed for the most part, that is why I would like to applaud and recognize the efforts and actions and yes sacrifices being made to help these beautiful birds, which play their part in the balance and circle of life.

If you go to the beach make sure you stay clear of the posted nesting areas do take lots of pictures and only leave footprints.