New York’s East End in the late Fall and early Winter is a Great fishing destinations. 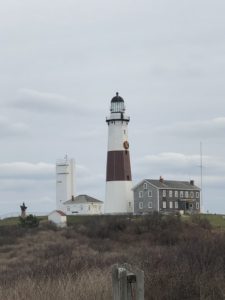 The Fishing is Amazing as the fish migrate South chasing the bait and leaving the incoming cold weather behind.

As the fish migrate they Round The Eastern Most Point of New York, “Montauk Point”,  A World Famous Fisherman’s Paradise.  The area is a Boater and Surf fishing mecca and the action can be frenetic, on this day it was quite mellow though.

On an overcast day in December, we headed East to join the surf fishing community for one of the last fishing tournaments of the season and year.  We watched as the prizes were given, but our highlight was the beautiful walk around the Rocky Shore of the Point,  We followed the Rocky paths that meander around and under the Famous Montauk Light House, a structure commissioned by the first President of the United States, George Washington.  This spot is known for producing trophy catches, on this day a Surf Caster putting in the time, was rewarded and culled in a nice catch.  Clearly it was not a trophy but it was good to see him catch, I did not expect him to catch anything as there were seals in the area that can kill a good bite.

If you make a trip to Montauk you must head to the Point and bring a surf rod and try your luck, If you are not a fisherman make sure you bring your camera as the views, and experience is worth capturing,